LeanerFasterStronger: A week of Olympians and Paralympians 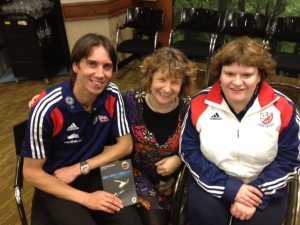 I started this blog last year as I wanted to write about the varied processes I might experience as a writer/dramaturg/co-creator working on three vastly differing productions over 2012. It was my plan to reflect on my experiences in ‘real time’ in research, rewrites, and in rehearsals, as the work grew and developed.

Part of this project was in response to the questions I’m often been asked by those I teach and mentor about the process of ‘being a playwright’.  My answer has always been ‘it depends’ – for I believe there is no one process, and my hope with writing the blog is to reveal some of the many processes writers and makers of live performance may encounter.

I’m currently at the end of the second week of rehearsals with Chol/Sheffield Theatres co-production of LeanerFasterStronger, a Cultural Olympiad project, reflecting on elite sport and the ethics and issues around human enhancement and sports science. It has been a research-heavy project, reading books and academic essays, being in residence at Sheffield Hallam University’s Centre for Sports Engineering Research, and interviewing former athletes who have competed at international level.

I’ve often wondered when the research will stop, for the issues are so current, especially with the Olympics and Paralympics fast approaching. Almost every day in rehearsals one of the company will pull out a story relevant to the play that was in that morning’s newspaper, or reported on television:  Themes of corruption, of sacrifice, of cheating or playing fair; advances in technology and bio-engineering; sportspeople breaking records, or collapsing and dying owing to the extreme rigour and demands of the sport.

Never before have I been involved in a project which is so current and ‘now’, which brings with it a responsibility. Although what we are embarking on is fictional and looking to the future, posing the central question of ‘How far would you go to be the best?’, the work needs to be credible, rooted in ‘truth’. Several events this past week have enabled me to check out my ideas with athletes competing at the highest level, and these conversations have impacted on the final revisions of the script. I feel astonishingly fortunate that these opportunities have come to me, and especially so mid-rehearsal. I never expected part of my job as a playwright would involve spending time with Paralympians and Olympians – nor that the final changes to a script would occur so close to production.

After a Paralympics panel event organised by Sheffield Hallam University and Radio Sheffield, I spoke at length with fencers Suzanna Rockett-Coughlan and Craig McCann, who were nervously waiting to discover whether they had been selected for 2012; and  2016  Paratriathlete hopeful Steve Judge. All talked about the necessity – and challenges – of keeping a good family/training balance, and the pleasures and trevails of competing at such a level.

Finding the human aspect, the emotional drama at the heart of sport has been central to my writing of the script. So much coverage of elite athletes focus on their super-ability and dedication; even the panel event that evening, introduced by the Chair of the British Paralympics Association, Tim Reddish, focused on the Paralympians as being inspirational, over-coming so many obstacles. That may be so and, sincerely, more power to them, but as a disabled woman I’m tired of the usual representations of people with impairments as either inspirational ‘heroes’, or the tragic but brave. To cut through this and connect, person to person, and share ideas and anecdotes, to talk about life and passion and winning or losing was phenomenal, and I am so grateful to the athletes for the insight they gave me into the beating human heart behind the high-pressured business of sport. 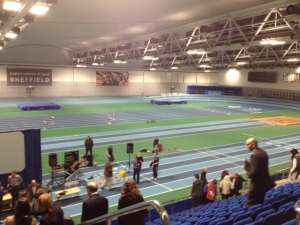 Cutting Edge 2012: Behind Athletics, the English Institute of Sport.

Later that week, it was the turn of Olympian Roger Black, top sports scientist Professor Steve Haake,  Professor Chris Cooper, an expert in the physiology of top athletes, and Dr Rob Harle, a lead researcher in the development of innovative video and body sensor technologies to aid the training of both novice and elite athletes. 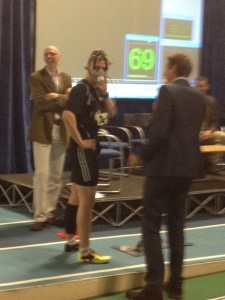 Cutting Edge 2012, at the English Institute of Sport, featured live athletics demonstrations and my own advisor, Dr David James, leading an interactive  survey on how far research and new technologies should be used in the quest to win gold. Given the subject of my play – How far would you go to be the best? – it felt as though the event was especially organised for me and the whole LFS company who attended. 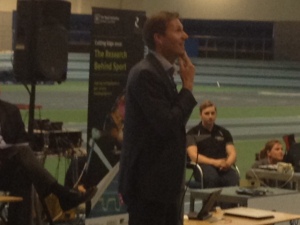 One of the actors, Morven Macbeth, asked a question pertinent to our research and garnered a great response from Roger Black:

“Sport is definitely an industry, there’s no doubt about that, and the Olympics is a massive business, we know that, but for the athlete – you’re still the young kid who had the dream; you’re still one of the lucky ones who happened to have a gift for sport… I may be naive, but I still believe, when I watch the Olympics, the vast majority of the athletes we’re watching are clean, and are doing it for the right reasons, pushing themselves, having a dream, and trying to fill that potential. I can say that, because I did it….But there are many people who absolutely believe you can’t win a medal without taking drugs. And I know that’s not true.”

Further responses touched on the notion of ‘the spirit’ and ‘the virtue’ of sport – and how one of the ‘rules’ of sport is to ‘uphold the spirit of sport’ – a circular argument – and these rules or tasks we set ourselves are often arbitrary.

Given that one of the themes of the script has been ‘Sport tests the limits of what humans can do’, this comment, combined with the developments in bio and genetic engineering, gave me much food for thought. Fuelled by these interventions and provocations during the week, I locked myself into my hotel room over the weekend and finished the script.

One response to “LeanerFasterStronger: A week of Olympians and Paralympians”