I’m delighted to make this pre-publication announcement: Oberon books will publish five of my plays and performance texts to coincide with the World premiere of Cosy at the Wales Millennium Centre in March 2016.

The news is so fresh, we haven’t yet settled on the image for the cover. I’ve been liaising with my agents and editor at Oberon about what production photographs to use after drawing up a shortlist by the fantastically talented Toby Farrow and Patrick Baldwin, who documented In Water I’m Weightless (National Theatre Wales) and peeling (Graeae Theatre Company) respectively. Mock-ups of the front and back covers will be made early in the New Year, with publicity bling thanks to Lyn Gardner, theatre critic for The Guardian. My long-term collaborator John McGrath, out-going artistic director of National Theatre Wales and in-coming director of the Manchester International Festival, will write the preface. 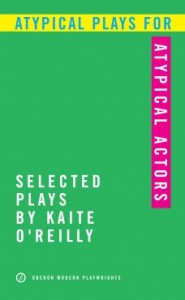 Atypical Plays For Atypical Actors is the first of its kind: a collection of dramas which redefines the notion of normalcy and extends the range of what it is to be human. From monologues, to performance texts, to realist plays, these involving and subversive pieces explore disability as a portal to new experience.

Includes the plays: peeling, The Almond and the Seahorse, In Water I’m Weightless, the 9 Fridas and Cosy.

Although disabled characters appear often in plays within the Western theatrical tradition, seldom have the writers been disabled or Deaf themselves, or written from those atypical embodied experiences. This is what contributes to making Kaite O’Reilly’s Selected Plays essential reading – critically acclaimed plays and performance texts written in a range of styles over twelve years, but all informed by a political and cultural disability perspective. They ‘answer back’ to the moral and medical models of disability and attempt to subvert or critique assumptions and negative representations of disabled people.

The selected plays and performance texts exhibit a broad approach to issues around disability. Some, like In Water I’m Weightless/The ‘d’ Monologues (part of the Cultural Olympiad and official festival celebrating the 2012 London Olympics and Paralympics) are embedded in disability politics, aesthetics, and ‘crip’ humour. A montage of monologues that can be performed solo or as a chorus, they challenge the normative gaze and celebrate all the possibilities of human variety. The Almond and the Seahorse is different, a ‘mainstream’ character-led realist drama about survivors of Traumatic Brain Injury, with subversive politics in its belly. A response to ‘tragic but brave’ depictions of head injury and memory loss, and informed by personal experience, the play interrogates the reality of living with TBI, questioning who the ‘victims’ are.

peeling, a landmark play written for one Deaf and two disabled female actors, was originally produced by Graeae Theatre Company in 2002, 2003, and for BBC Radio 3. A ‘feminist masterpiece…quietly ground breaking’ (Joyce McMillan, The Scotsman), it has become a set text for Theatre and Drama and Disability Studies university degree courses in the UK and US. Frequently remounted, its lively meta-theatrical form supports its central themes of war, eugenics, and a woman’s control over her fertility, which are as relevant today as ever.

The performance text the 9 Fridas is a complex mosaic offering multiple representations of arguably the world’s most famous female artist, Frida Kahlo, reclaiming her as a disability icon. Performed in Mandarin translation, it was the closing production of the 2014 Taipei Art Festival and will transfer to Hong Kong in October 2016. It is currently being translated into German, Hindi, and Spanish.

Cosy is a darkly comedic look at the joys and humiliations of getting older and how we shuffle off this mortal coil. Three generations of a dysfunctional family explore their choices in a world obsessed with eternal youth, and asks whose life (or death) is it, anyway? An Unlimited Commission, Cosy will premiere and tour nationally in 2016, appearing at the Unlimited Festivals at Southbank Centre and Tramway.