That was the year that was. But has anything actually changed?

I began this blog back in August 2011 after I realised that 2012 would bring an embarrassment of riches production-wise. As the forthcoming work is diverse in aesthetic, process and content, I felt much might be learnt, and writing a blog might help externalise my learning, publicise the work and document the process(es).

For they are process(es)… Devising, playwriting, co-creating, collaborative montaging… I’m excited by what 2012 will bring, and the diversity both of the work and the creative approaches I’ll be involved with. It challenges that stereotype of the solo dramatist writing away, misunderstood and alone, in her garret – and the notion that there is only one way of writing plays/drama/performance work (delete as applicable).

But before moving forwards into 2012, and The Echo Chamber, the first project (which begins full rehearsals on December 28th 2011 and will be written about, here), I think it expedient to look back over the year at some of the projects I’ve made and the people I have collaborated with, particularly within disability arts and culture, and ask have we moved on? Has anything actually changed?

‘peeling’, first produced by Graeae Theatre Company and designed and directed by Jenny Sealey in 2002, had a revival in Forest Forge’s production, touring rurally. The director, Kirstie Davies, had been keen to find an opportunity to produce the script for some time and it was fascinating to return to an old script and see what had stood the test of time, what required updating, what was no longer relevant…

Perhaps it’s a sign of how far we still have to go in perceiving disabled and Deaf people as equal citizens and not ‘other’, but we discovered the cultural and socio-political aspects parodied or challenged in the play were still as relevant in 2011 as 2002. The only changes to the script I made were updating celebrity names. The stories in the play of being patronised, feared, or discriminated against still held – and the off-duty conversations we had in the green room about the challenges disabled and Deaf women face when working in the creative industries were as familiar and tiresome as they had been first time round, at the beginning of this Millennium.

As I wrote during rehearsals in February 2011:

Ali, Nickie, and Kiruna are powerful, comical, and poignant… I am congratulating Kirstie Davis, artistic director of Forest Forge, on her superb casting and her liberating, inclusive attitude – for it is still extremely rare. Sadly, in my twenty plus years of professional experience in theatre, I have largely found a reluctance for companies to cast disabled and Deaf actors, even in parts written specifically for them. Perhaps this is based on fear, or ignorance, or uninformed preconceptions – things are certainly changing and improving – but we certainly need more like Kirstie in the industry.

This radical aspect to Kirstie’s programming was also appreciated by Mark Courtice writing about the production in April 2011 in reviewsgate:

Forest Forge, in taking [peeling] to the arts centres and village halls of Hampshire and Wiltshire,  demonstrate the sort of courage and enterprise that make the recent Arts Council decision to cut their grant seem more than usually incomprehensible.

Here is one area where I feel there has been a change: the 2011 reviews of ‘peeling’ were not as toe-curlingly insensitive or offensive as some had been, the first time round. Perhaps the influence of the Medical Model has begun to wane, but here were no lingering descriptions of the performers’ bodies or impairments, nor morbid fascination with physical difference. Thankfully, there was no polarity between ‘handicaps’ and ‘real people’ as there had been in The independent in 2002.

And so from a remounting of old workmade new, to a new piece so new it has not had a production yet:

‘Your Tongue, My Lips’ is work in progress exploring disability and sexuality, and part of my Unlimited Commission from LOCOG and the Cultural Olympiad, to develop new work inspired by disability experience. In June 2011 I had a residency at Chapter Arts Centre in Cardiff, working with director Peader Kirk and performers Mat Fraser, Kiruna Stamell, Christopher Fitzsimmonds, Sara Beer, Tom Wentworth, Ben Owen Jones and Carri Munn. 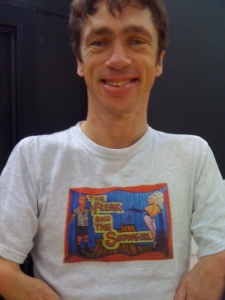 I feel there has been a shift in many ways towards some of the work coming out of disability arts and culture – but it isn’t necessarily from the mainstream, but from what used to be snootily or suspiciously called ‘the avant-garde’.  In many contexts disability arts and culture has been viewed as either therapy or amateur expression – I have been wrestling with this for more years than I care to count. It comes then as no real surprise that many of the allies to my crip culture work have been artists working experimentally themselves, or gate-keepers to institutions or venues which value experimentation. Such was my experience when working with Peader and the actors at Chapter, and my interactions with James Tyson, former programmer of the venue, and Richard Huw Morgan of Good Cop Bad Cop, and Pitch, Radio Cardiff,  98.7FM.

For a lengthy interview with the performers and me about this work, please follow the link below to Pitch,  ‘a cool arts magazine, but on-air’ (The Guardian’).

It is an archive recording of programme 6 and the interview between Richard and I starts 31.58 minutes in.

In the second part of this blog, I will write about my work in the latter part of this year, working more in the ‘mainstream’.