Diary of a collaboration…. 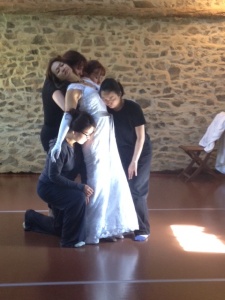 What an astonishing and intense eight days research and development…

The end of August 2013 has been marked by a week of making, playing, devising, scripting, montaging, collaborating and sharing work in progress with two audiences of [Playing] The Maids, a collaboration between three companies and nine artists from four countries: South Korea (Theatre P’Yut), Ireland (Gaitkrash), Wales (The Llanarth Group) and Singapore.

Each collaborator brought ‘entry points’ to devising, informed by their interpretation of themes from Genet’s The Maids. This may have been a piece of music from cellist Adrian Curtin, or a sound environment created by Mick O’Shea and Adrian for the performers to respond to and dialogue with; sometimes it was found or created text, images, choreography or traditional dance from the individual’s cultural background. The points of entry into collaboration were each explored and shared, and by mid-week we had a list of thirty possible structures (‘scenes’ or components) we could develop further.

At a dramaturgy meeting mid-week Sunhee Kim, Phillip Zarrilli, Bernie Cronin, Regina Crowley and I sat down and worked through the list Phillip and I had compiled, as outside eyes, of the list of raw materials. We identified different compartments including Text, Structured Improvisations, Physical scores/ choreography and ‘mixed’. We then revised each structure, prioritising some for further development that week, and shelving others for future development in a later part of the project. Already some elements were coming together as possible sequences, which we scheduled for montage and further exploration the next two days.

By Saturday, our sixth day together, we had approximately 80 minutes worth of material, some scripted and choreographed, others improvised, which we shared with a small invited audience in the Llanarth Group’s studio in west Wales. It was an informal presentation to artists and those predominantly working in performance, talking through part of the process and putting very raw work up before an audience for the first time. This part of the procedure was immensely fruitful, but not one I would recommend for inexperienced practitioners or a ‘general’ audience. The work can be very delicate so early on in development, and it takes robust, experienced practitioners and knowledgeable, supportive audience members to ensure the work isn’t bruised by such early exposure. Our experience was extremely helpful and informative, and we instantly learnt lessons about the work, the montage, and areas for further revision and development. 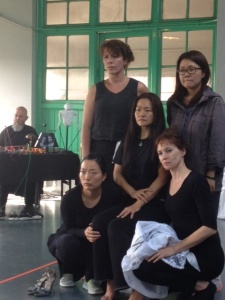 Sunday morning we drove in convey to Cardiff and our second informal sharing at Y llofft, Chapter Arts Centre. Informed by the sharing the day before, we revised the structures, trying out new formations and dynamics in a new space. As the larger invited audience arrived, we showed three sequences, in some cases trying out new things for the first time, which was an exhilarating experience for the company as well as the audience. We received extremely positive feedback from the audience afterwards, who were also predominantly made up of those involved in live performance – performers, practitioners and educators. It was an affirming and triumphant end to an extraordinary week, and the company members dispersed to the train station, the night ferry, and Heathrow airport affirmed and extremely excited about the next phase of the development, scheduled for 2014. 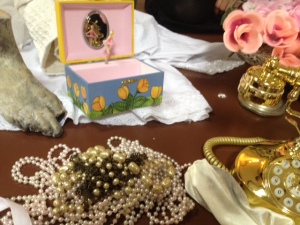 During our previous two days collaboration, we shared song, sounds, music and dance representatives of ‘Madam’ figures from our respective cultural backgrounds; we’ve explored initial texts generated by individuals of the ensemble in response to the stimulus text (Genet’s The Maids); we’ve made physical and text-basd improvisations in response to the sound environment Adrian Curtin and Mick O’Shea created, and in response to themes such as ‘siblings’, ‘servitude’, ‘distance’ and ‘intimacy’. This morning we begin with the starting point of props, puppets and costumes.

Gaitkrash (Bernadette Cronin, Regina Crowley and Mick O’Shea) brought a treasure trove of objects from their Cabinet of Curiosities, which emerged from the ensemble’s first collaboration in 2007. 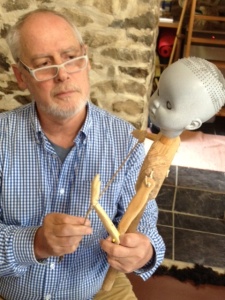 Phillip Zarrilli with one of Mick O’Shea’s puppets

Phillip brought out various puppets, with which we explored agency and manipulation, prompting various instantaneous improvisations, where Sunhee and Jeungsook manipulated Adrian as he played the cello. 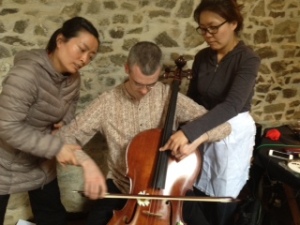 Already, even after such a short period together, we are beginning to see possibilities for assemblage – content that has resonance and complicity – counter-point and dissonance.

We begin to give names to sounds and combinations Mick and Adrian are making so that we may be able to identify and recreate them once we begin to montage. We could continue generating material forever, but already I am itching to put certain structures, texts, and physical scores together….

Our process has been peripatetic and predominately movement-led so far. In our early days of collaboration, back in the Spring, material came from exercises led by Ian in which he and Phillip responded to each other in the space. ‘One moves, one responds’ has proven to be particularly fertile, but this is perhaps to be expected from two practitioners who can count training in Kerala in Kathakali dance theatre and Kalarippayyttu, in Paris with Monika Pagneux, and in Italy with Grotowski at his Workcenter between them.

Some weeks ago I began to write seriously in preparation for these rehearsals, trying to create possible text (usually in solo form – very little dialogue), which might become ‘moments’, or be added to physical sequences or structures. Much of the inspiration for that material was informed by some of the physical scores or motifs appearing in physical improvisations: a hand repeatedly stroking a beard; a seated, cross-armed stance combined with a tilted upwards look; the impulse to fall upwards or outwards; a hand, reaching; stillness.

I was not necessarily conscious of the potency of these physical actions when they occurred (in Berlin in April, in Wales in the spring. in London in November) – but was aware of their potential enough to note them, and for Ian, Peader and Phillip to keep returning to them. As I mentioned in my previous blog, the video also helped (although we had to get by solely on Ian and Phillip’s body memory and Peader and my notes from the work in Berlin, which was without video documentation).

What’s clear in our collaboration is this is co-created. This is not a ‘playwritten’ process, where I create a script and we then work from it; nor is this devising, where I formalise recorded character-based improvisations into text. This will be collaged work – physical structure and motifs combined with texts either spoken, sung, or used as inner scores or internal monologues which may never be spoken. At this point in our process, text may also be a bridging device from one state into the creation of another – to something very different, where that initial text may not be present.

Posted in on performance, on writing