The Way You Look At Me Tonight, Claire Cunningham

The Unlimited Commissions programme aims to embed work by disabled and Deaf artists within the cultural sector, reaching new audiences and shifting perceptions of disability. I’ve just had the confirmed details of the two Unlimited Festivals happening this Autumn in London and Glasgow, and am delighted to say I will be speaking at both.

What follows is information from  UNLIMITED:

Tickets are now available for both Southbank Centre and Tramway’s Unlimited Festivals, featuring many of the artists commissioned by Unlimited in 2015 and work we’ve supported through Unlimited Impact.

Join Southbank Centre once again for a festival of theatre, dance, music, literature, comedy and visual arts that celebrates difference with a spirit of artistic adventure, honesty and humour. Read more here.

Tramway’s Unlimited Festival celebrates extraordinary work by disabled artists with an international programme of performance, visual art, discussions and more. Including new and acclaimed productions, exhibitions and participation opportunities, along with a variety of city centre installations, a family day and a two day symposium focusing on emerging artists. Information here. 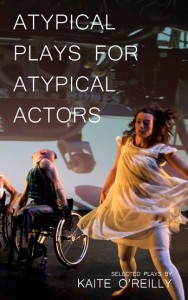 Join multi award-winning playwright Kaite O’Reilly as she presents her latest work. Published by Oberon, Atypical Plays for Atypical Actors is the first of its kind. A collection of six dramas, it redefines notions of normality and expands the scope of what it means to be human, while exploring disability as a portal to new experience. Followed by Atypical in Action, a talk and workshop exploring some of the ‘aesthetics of access’ used in O’Reilly’s work.

Both events in London and Glasgow are free, but ticketed, so please book your place in advance.

Posted in Disability arts and culture, on process, on writing

At a launch earlier this week, the next nine commissions from Unlimited were announced. I’m delighted to be one of them.

Cosy is a darkly humorous play in an inclusive production for a mainstream audience, exploring universal ethical issues of life, death, and our relationship to the medical profession, and its desire to mend and sustain the body, regardless of quality of life. It aims to examine the final taboo with wit, intelligence and full emotional engagement, powered by a disability perspective.

“I’m delighted that the panel behind Unlimited have seen the potential in this new play, exploring what is arguably our last taboo – the means by which we shuffle off this mortal coil. I hope to explore this often feared topic with humorous irreverence, as well as sobriety and respect. What I love about humans is our ability to live joyfully and in the moment, despite the knowledge our time is finite and we will all die one day. How these two opposing perspectives co-exist will be fascinating to explore theatrically – and the deceptions, avoidances, contradictions and confrontations within a family with distinct and different ethical, religious, and political perspectives of end of life scenarios.

As someone who identifies as disabled, I have long been part of a vibrant community known for its joie de vivre and gallows humour – created, perhaps, from our knowledge of the fragility and resilience of the human body. I want to bring some of the quality of this insight and perspective to the script, in a production I hope will be funny, quirky, honest, daring, and fully engaging emotionally and intellectually.’

‘Cosy’ will be directed by internationally recognized Wales-based director, Phillip Zarrilli. It will premiere in Wales in spring 2016 before taking it to the Unlimited festivals at the South Bank, London and Tramway, Glasgow in September 2016.

‘Art is at the heart of Unlimited; it’s the work that disabled artists and companies create that has the power and potential to transform perceptions. It’s a real privilege to be able to extend that opportunity now not just to artists based in England and Scotland but Wales too. I can’t wait to see what they all have to offer!’

The nine Unlimited commissions for 2015-16 span a wide range of disciplines – including theatre, visual arts, dance and literature – and are created by some of the most talented disabled artists in the UK.

Posted in Disability arts and culture, on performance