Mid April already, richard iii redux completed for the time being after a terrific Wales-wide tour – and now far-flung travel beckons. I leave next week for Hong Kong, where I will be leading a six day workshop on inclusivity and forms of storytelling for ADAHK

I was last in Hong Kong in 2016 with my performance text about Frida Kahlo, the 9 fridas, directed by Phillip Zarrilli and produced for the Black Box International Festival at Hong Kong Repertory Theatre, in association with Mobius Strip, from Taiwan.  It will be fascinating to spend more time in Hong Kong working with local theatre practitioners, learning about their approaches to inclusive practice. I’m hoping to have an opportunity to see new work as well as explore the art centres and galleries of Kowloon, where I will be based.

From Hong Kong I will fly directly to Singapore, to begin rehearsals on my Unlimited International Commission And Suddenly I Disappear: The Singapore ‘d’ Monologues. We have just released tickets for the World premiere of this dialogue about difference, disability and diversity from opposite sides of the world, premiering on 25 May 2018 at National Museum of Singapore Bit.ly/and suddenlyidisappear

The production will tour to the UK in September, and I will give further details of the venues in England and Wales, plus special guests, closer to the time. My thanks, as ever, goes to our funders and supporters: Unlimited, Arts Council Wales, and the British Council, who alongside Singapore International Foundation and Centre 42 will make this innovative intercultural project possible. Meanwhile, here’s the glorious video featuring Sophie Stone, Ramesh Meyyappan, Sara Beer, Peter Sau, Grace Khoo and Lee Lee Lim, made by James Khoo with director Phillip Zarrilli:

I was wonderfully surprised earlier this week to get an email from Chwarae Teg, informing me I had been shortlisted for their Womenspire 2018 Awards. Chwarae Teg is a charity working to redress the gender balance in the workplace in Wales, with a vision to create: “A Wales where women achieve and prosper.” I didn’t know I had been nominated for the Culture award, so to discover I’ve made the shortlist of four has been an incredible pleasure and privilege, making this quite a week. I’ll be celebrating the talent, passion, and vivacity of women in Wales at Womenspire 2018 at the Wales Millennium Centre on 5th June.

Posted in Deaf arts, Disability arts and culture, on performance, on process, on writing

On translation, lyricism, and alligator meat

I’m juggling projects and tasks at present – and unexpectedly, I’m liking the jambalaya effect (minus the alligator meat). Often I need to focus on one project at a time – it takes an age to get ‘inside’ a project’s DNA, and once there I like to stay until exhaustion demands I step away from the laptop. (Exhaustion? Not necessarily of me personally, but of the thread I’m pursuing. Like a seam of silver running through the earth, it can suddenly stop, or become so buried I know I have to come back to unearth more treasure another time…)

Quite a bit of the work at present is making the most of technology and the miracle that is Skype. For some years, since my work has been produced outside the UK, I’ve been using Skype to sit in on rehearsals remotely – and director Phillip Zarrilli and I are back to that this week, skypeing with Mobius Strip Theatre in Taipei. In 2014 Phillip directed the premiere of my performance text the 9 Fridas about Frida Kahlo for Taipei International Arts Festival; that production will be remounted this autumn and transfer to Hong Kong Repertory Theatre. We will go to Taipei for the final re-rehearsals before flying to HK in October, but meanwhile Skype enables us to revisit the work with the actors in advance, extending our condensed re-rehearsal period. 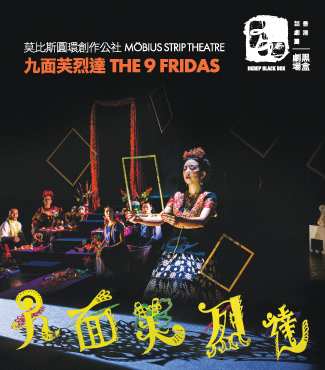 The Taiwanese production of the 9 Fridas is in Mandarin, and many have asked me how it is possible to work in a different language. Neither Phillip nor I know Mandarin, but we know the script extremely well, and after a short while communication and comprehension becomes fluid, and it is surprising how proficient we can become at knowing exactly where we are in the script and what the performer is saying at any time.

There is a particular musicality to the dialogue I write – the punctuation, rhythm, pauses, and pace are almost as important to me as what is being said. I think I compose dialogue, needing to ‘hear’ its flow and musicality, its change in texture and syntax as well as content. This has become a focal point in another on-going translation project with theatre maker Martin Carnevali. Some years ago Martin was part of a workshop exploration of the 9 Fridas, and he forged a strong connection to the text and its aesthetic, as well as to me as a creative collaborator. To my great delight, he is now translating it into German for my Berlin agent.

Martin fully understands the importance of the ‘sound’ of the words in the mouth, and during the Summer Intensive in West Wales, we took some time together in the T’yn-y-Parc studio for him to read aloud the work he has done. It was remarkable how his choices in German paralleled the rhythm of the spoken English, which was his intention. He would read sections aloud to me, testing it for flow, lyricism, and variety, amending the text as he went along for sound as well as meaning. Occasionally he would read the same section several times, and we would discuss whether there was a syllable too many or too few – whether the text moved in a rhythm appropriate for the content. It was a remarkably visceral  experience, and one I enjoyed immensely.

Martin Carnevali at work translating the 9 Fridas into German

This process is still on-going, and we will continue our sharing of text between languages on Skype, although nothing will beat hearing the words within the stone walls of the old Welsh milking parlour, now studio. Nothing, except a German language production, of course.