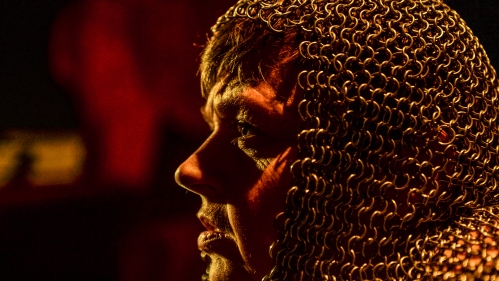 And so it comes around… and appropriately, on International Women’s Day – the world premiere of richard iii redux OR Sara Beer [is/not] Richard III… Delighted to discover we’re sold out tonight at Chapter Arts Centre in Cardiff – it seems such a terrific way to celebrate today – a one woman show, taking on an iconic male role, subverting it, commenting on it, remixing it and making it her own….. And a disabled woman performer in a powerful role, commanding centre-stage…. I am so proud of the work Sara is doing, and so grateful to the talented and committed artists, designers, and crew working with The Llanarth Group.

The past few days have been tech and dress rehearsals, where Paddy Faulkner of panopticphotography took these images. Our final dress this afternoon was crowned with an interview with @MadeInCardiff TV – Sara Beer, director Phillip Zarrilli and I all talking about our particular processes and perspectives on the project, which should be going out over the next three nights.

We also spoke with Nicola Heywood Thomas on BBC Radio Wales Arts Show, which you can listen again to, or download as a podcast here

@Buzz_Magazine also previewed the show in their March 2018 edition, on page 28, here 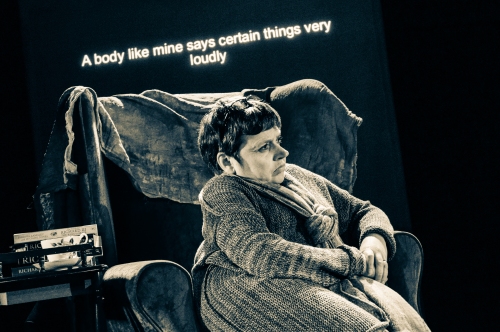 We are determined to make the show as accessible as possible, and so I am touring with the production as live captioner. I think this is a first. I’ve never heard of the playwright/dramaturg taking a place in the on-stage tech corner – responsible for projecting her text onto the screens, matching the performer’s spoken words. This is a production where there are no smoke and mirrors – everything is transparent and in view, which matches the metatheatrical nature of the performance. So many productions make a song and dance about captioning one show in a whole run – and that’s great, but not enough… we will caption every single performance, from Cardiff, Aberystwyth, to Theatre Clwyd in Mold, from The Torch at Milford Haven, to Small World Theatre in Cardigan. Captioning makes a production more accessible for all sorts of audience members, and creates an additional interesting aesthetic, as can be seen by Paddy’s photograph, above.

We are so excited to be finally bringing this production before an audience tonight – Sara is ready for her public! – and celebrating international women’s day, putting women usually left off-stage or in the shadows in full light, centre-stage.

Posted in Disability arts and culture, on performance, on process, on writing