Juggling productions – The 9 Fridas, Woman of Flowers, and Fun Palaces

It’s a phenomenally busy week – perhaps the busiest I have ever experienced with productions opening, rehearsals beginning, and deadlines looming all in the same five days..

‘The 9 Fridas’ last rehearsal before get-in at Wellspring Theatre

It’s production week for ‘The 9 Fridas’ in Taipei. We have a group photograph at the end of the final rehearsal in Mobius Strip Theatre Company’s welcoming and creative studio – cast, crew, lighting and costume designers, company manager, director and playwright all squeezing into a final celebratory shot. Many take on their Frida Kahlo self portrait pose – including our fabulous stage manager, Knife (front row right), which tells a lot about our dynamic and sense of ownership of the material. The ensemble feeling and collective endeavour is inspiring and been very much my experience when working with the terrific Mobius Strip company.

Sandra, Knife and Jack backstage at the Wellspring Theatre. Bump-in.

‘Bump-in’ to theatres are notoriously tricky and stressful, but our stage management are full of energy and joie-de-vivre as the company start moving in, making the Wellspring Theatre our space, even for a short time.

Director Phillip Zarrilli and I make a trip to nearby Longshan temple, to make an offering for the success of the production. It is a beautiful space, filled with incense and flower and food offerings.  I could linger for a long time in such a vibrant yet peaceful place – but I have a rehearsal to go to.

Taipei is seven hours ahead of UK time, so when I finish my day’s rehearsal with Mobius Strip on ‘The 9 Fridas’, I skype into opening rehearsals with Forest Forge Theatre Company in England. 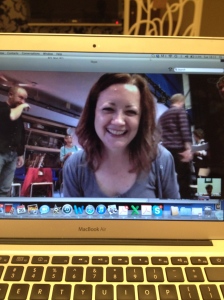 Kirstie Davis, director of ‘Woman of Flowers’ at first day of rehearsals.

I don’t know how we managed before the marvellous invention of skype. Just as I skyped into the first read through of ‘The 9 Fridas’ in the Spring from Berlin to Taipei, I skyped into ‘Woman of Flowers’, my forthcoming production with Forest Forge Theatre Company, directed by Kirstie Davis. ‘Woman of Flowers’ tours the UK from mid-September and tour dates are here.

Attending rehearsals of ‘Woman of Flowers’ by skype.

‘Woman of Flowers’ is a new text (which I will write about in future posts), and attending rehearsals to make adjustments and revisions is essential, especially as the script will be published. Miraculously the internet connection from Taipei to Ringwood is strong and I can answer questions from the actors and be a part of the process virtually, until I return to the UK and join the rehearsals in ‘meat space’ next week.  I’m grateful that Kirstie is such an open director, willing to incorporate new technologies into her rehearsal process – and for the actors for being unfazed at having the playwright present via a slim computer screen.

The final commitment of the week is my Agent 160 commission for the Cardiff Fun Palace. I’m proud to be one of the patrons of this company set up to address the gender imbalance in theatre (only 17% of produced plays are by women), and this project is special, commissioning 16 short monologues by women playwrights all across the UK. The work we make and the individual projects created by other pop-up Fun Palaces will be shown over the weekend of 4th and 5th October across the UK and the world. My deadline looms. Time seems elastic and my working day mounts to 16 hours as I swing between time zones, writing when the UK has yet to wake and sleeping while the UK working day comes to an end. I’m delighted to be part of the Fun Palace initiative set up by Stella Duffy and Sarah-Jane Rawlings to commemorate legendary theatre director Joan Littlewood and her radical vision. 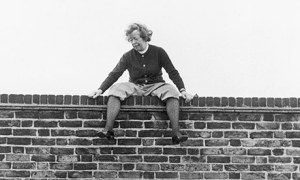 You can read Stella Duffy’s latest blog on Fun Palaces – by, for and of the people here  and the fabulous treats in store for the Cardiff Fun Palace, set up by Agent 160 Theatre through their blog. All events are free, but you can support this initiative in Cardiff Bay through their kickstarter campaign.

This may be the last from me for a few days.

I’ve got quite a few things going on….