Fundit: Playing the Maids – three days to do it.

Crowdfunding and its ilk is probably the defining word and activity of this particular era. I’ve heard so many arguments for and against of late – euphoric stories of people investing in arts projects they believe in (and getting ‘gifts’ or perks in return), to those who see this kind of funding as being complicit in the privatisation of the arts.

However we may approach it, this practice is now ubiquitous, and part of the process of getting work before an audience… And so here is an appeal from Gaitkrash (Ireland), The Llanarth Group (Wales), Theatre P’Yut (Korea), and Jing Okorn Kuo. We are looking for support to realise Playing the Maids…

As rewards for supporting this campaign, we have tickets to the previews in Cork in June 2014 and the premiere in Cardiff in 2015, original artwork by Mick O’Shea and other surprises and treats. We are trying to raise 2,500 euros over one week (donations can be made in euros and sterling) – we are half way there after three days and have three days remaining – so time is of the essence!

I know these are austerity times and the artistic community are making increasingly ambitious work with less and less money. I know there is barely enough money to go around as it is – and our future challenges will be how to survive. All we can do is continue with hope, optimism and  integrity, making the best work we can. I think this is a special project, but you can see a trailer and details of the campaign at:

Playing the Maids: Inspired by Jean Genet’s classic, playing ‘the maids’ explores the dynamics of power and servitude, wealth-as-privilege, and the politics of intimacy. Two pairs of maids – Irish and Korean, a Chinese Madame, a sound artist, and a cellist weave together a rich web of musical, textual and gestural languages to create a compelling theatrical experience.

‘…a very moving and intense experience… humour, beautiful imagery; a strong and fascinating sound score that forms an integral part of the live performance…’ 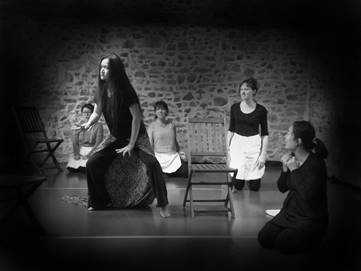