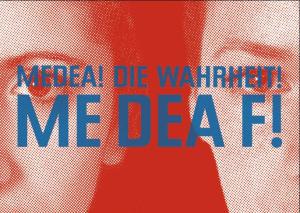 I saw this integrated production of Deaf and hearing teenagers last weekend at Ballhaus Ost in Berlin, and asked production assistant, Rafael Ugarte Chacón to write about the process and the experience for this blog, and was delighted when he agreed. Rafael recently wrote another guest blog, about his impressions of the Unlimited Festival at the Southbank in London, which you can read at:  https://kaiteoreilly.wordpress.com/2012/09/26/guest-blog-unlimited-impressions/

The last September weekend, the last shows of „MEDEA! DIE WAHRHEIT! ME DEA F!“ (Engl. „MEDEA! THE TRUTH! ME DEA F!“) took place in Ballhaus Ost Berlin. This production unites Deaf and hearing actors and actresses, adults and teenagers, professionals and amateurs. As a production assistant I was deeply involved in the process of staging a Greek myth with Deaf and hard of hearing teenagers.

„MEDEA!“ is the second theatre production of the Berlin based group Possible World and premiered in December 2011. The hearing director Michaela Caspar wanted to work with Deaf teenagers in an artistic project and thus cooperated with a school for the Deaf. The aim has never been to start a pedagogical project, but to make art – with the means and potentials that Deafness, sign language and the young age of the protagonists provide. Michaela decided to cooperate also with professional hearing actors, so that the group was mixed and the members could learn from each other. The shows were to be in speech and sign alike, directed to Deaf and hearing audiences. It was quickly decided that most of the roles should be played by two actors – one speaking and one signing.

The production was not based on the Euripidean Medea, but on a play that the author Till Nikolaus von Heiseler had written for the group, telling the story of Jason and Medea meeting for the first time, stealing the Golden Fleece from Medea’s father and fleeing to Greece. All in all a rather archaic plot, starring goddesses and kings, full of conflicts between empires, sexes, generations and – not surprisingly – Deaf and hearing.

Working with texts is always a challenge when Deaf people are involved. Most of them don’t think in words, but images. Deaf culture lives from face to face communication, not from scripture. Furthermore, learning to read means to learn the connection between graphic symbols and sounds – if one doesn’t perceive the sounds, this process is incomparably more difficult. As most of the involved teenagers’ families migrated to Germany, neither German Sign Language (DGS) nor German are their native languages. The communication in the families is rather in Turkish, Armenian or Russian. As a consequence understanding the original text of the play, written in a beautiful poetic language, but not easy to unterstand immediately even for German native speakers, was virtually impossible for the teenagers.

So it was the task of the team around interpreter Anka Böttcher to make the plot and the scenes accessible not only to a Deaf audience, but as a first step to our Deaf actors and actresses. We talked a lot with them about the general plot, but also about myths, Ancient Greece, the characters and their motivations and the situations they find themselves in. As a textual basis, we „translated“ the original text in contemporary German and read it together with the actors and actresses. Anka provided a first rough translation in DGS which we discussed together with the teenagers. It was absolutely crucial that they understand the scene situation and that they are able to relate to it. In most of the cases, we changed the translations according to the requirements and suggestions by the teenagers, finding adequate and understandable formulations and signs.

In some of the scenes we tried to make use of poetic means that are characteristic for sign languages, thus creating a poetic imagery only possible in a visual language like DGS.

In the actual performance, the text was a complex mixture from spoken words, sign and projected writing, combined with sound, music and multisensory rhythmic elements like stomping. Our aim was to make a performance for Deaf and hearing audiences, but not by the means of a mere interpretation, but as the result of an aesthetic process involving Deaf and hearing actors and actresses. So there are scenes and episodes that are spoken or signed or both, or entirely without words. According to the audiences’ linguistic backgrounds, the given information slightly changes. Some scenes are accessible rather to signers, others to hearing people – everybody is sometimes left out. Sometimes one group has an advantage, sometimes the other one. But all in all, the plot and the text are accessible to all of them.

Although we are still searching for the best means to communicate with Deaf and hearing audiences – and I’m sure the search will never be at an end –, I hope we have been able to give to every audience member an insight to something new. Maybe some hearing spectators had an impression about the artistic potential of sign language, and some Deaf spectators could participate in a performance which goes beyond mere interpretation. I’m sure that being part of a mixed audience, hearing and Deaf together, certainly is a very special experience to most of us – and this is one of the most important functions of theatre: coming together.

To  get an impression of the show, watch the trailer or visit the websites of Possible World with a lot of photos and further information about „MEDEA!“ and other projects (English and German).

Rafael Ugarte Chacón is doctoral student at the Institute for Theatre Studies at Freie Universität Berlin. He is writing his thesis about aesthetic means in artistic performances for Deaf and hearing audiences.