The Stage, Disability Arts Online, and Sparklewheels on In Water I’m Weightless.

I started this blog a year ago, wanting to document process and hopefully reveal some of the skills and experiences I as a dramaturg/performance writer may go through when making work in a broad range of styles.

I also want to have this as a place for discussion and reflection – dialogue, if you like.

My most recent production, In Water I’m Weightless, with National Theatre Wales, closed at The Purcell Rooms, Southbank Centre, London, as art of the Cultural Olympiad and celebratory Unlimited Festival, between the Olympic and Paralympic Games. I am now working in Berlin, but receiving more reactions to the work – interviews, reports, and reviews. I will partly reproduce them here, with the link to the relevant website so you can read further, if you so wish.

What follows is a mixture of opinion and perspectives – from the so-called ‘mainstream’ speciality industry publications (The Stage), disability culture (DAO) and a personal blog, informed by a disability perspective (Sparklewheels). It might be an illuminating mix!

Playwright Kaite O’Reilly is seeking to confront and confound people’s perceptions of disability with her latest production, writes Derek Smith:

A decade ago, Kaite O’Reilly, the award-winning playwright, poet and disability arts campaigner, created a stir. Peeling, the darkly comic play she had just written for the Graeae Theatre Company, proved groundbreaking enough, but some of the language used to champion her views on disability in theatre, must have caused a fair few in theatre to undergo some soul searching.

Speaking to O’Reilly recently in-between rehearsals for her new show, In Water I’m Weightless, there’s clearly still a burning belief that what the international dramaturg, author, mentor, tutor and honorary fellow at Exeter University said all those years ago hit the bull’s eye.

“One of the lines from that play has become a slogan,” she reflects with palpable pride. “What I said 10 years ago was that ‘cripping up’ had become the new, 21st century answer to blacking up. You know, that Richard III thing when someone pretends to have a hump or lose a leg, and so on. Mental health, disability and impairment roles are in so many plays, but invariably still played by non-disabled actors pretending to have that disability,” she says.

In 2012, it’s still the case, but it is getting better, she says. There’s still a huge amount of work to be done in the area of disability acceptance and inclusion in the arts – a fact borne out by actress Lisa Hammon’s recent comments in The Stage (August 23, News, page 2). “We just have to encourage people to get over their worries and their fears, says O’Reilly. “But, it’s very interesting now because people are getting excited about the challenge and the ideas.”

To read more of this interview, please go to: 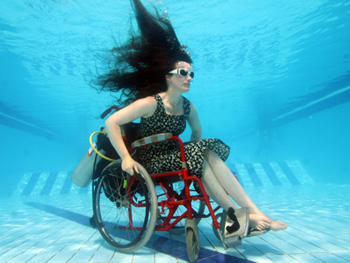 The official image of Unlimited Festival by the superb Sue Austin.

.Paul F Cockburn for Disability Arts Online (DAO) Talks to Kaite O’Reilly and the Cast of In Water I’m Weightless about the production:

After an acclaimed run in Cardiff, National Theatre Wales and a cast of deaf and disabled performers brings the award-winning Kaite O’Reilly’s ‘In Water I’m Weightless’ to London as part of the Unlimited festival at the Southbank Centre.But how did such an imaginative, poignant and funny work come together? Paul F Cockburn, dropped in during the final week of rehearsals last July.

The morning DAO drops in on rehearsals, the cast have been working on In Water I’m Weightless for four solid weeks. With opening night now only a few days away, the momentum is palpable as the show’s ensemble cast — Mandy Colleran (who has to drop out after injury), Mat Fraser, Karina Jones, Nick Phillips, Sophie Stone and David Toole — physically flex and warm their bodies to the soundtrack of Michael Jackson’s Thriller.

The morning, according to NTW Media Officer Catrin Rogers, will be spent primarily doing ‘tech’. This is the first time the cast have been given their costumes, so the focus will be on going through the ‘tops and tails’ of scenes, focusing not on performance but the practical issues of stage positions and costume changes.

Director John E McGrath underlines how the cast should raise any issues they have from this process, not least visually impaired Karina Jones, who at one point has to dance in a big dress while wearing high heals. She’s up for it, but there are concerns: “You have a go at everything, because you’re fearless,” John tells her, though he later wonders if the question of her shoes will “haunt the whole production”.

The afternoon is dominated by the first proper run-through of the piece that brings together not just the cast but also the technical team with the music, soundscape and visual projections which are an integral part of the show. “Focus on meaning, on the work that’s been done on a scene,” John tells the cast.

“There are no happy endings. There are just run-throughs,” responds popular cast-member Nick Phillips, humorously paraphrasing what all too quickly becomes as an important theme of the work, repeated through the production.

Nick is the ‘original find’ of this production. Although professionally trained as a dancer, he had given up on performance after a car accident. It was involvement in an earlier NTW production that helped change his mind.

“I kind of just came to the conclusion that, actually, it was no different to what I used to do; it just happens that I have my wheelchair now,” he explains. “I’m still a bit wary of this not being my usual projected image on stage. My safety net is the others around me. I think I would have a different feeling about it if I was on my own — that first step onto the stage would be a lot scarier if I didn’t have these guys around me.”

To read more of this please go to: http://www.disabilityartsonline.org.uk/?location_id=1873

Two further reviews of In Water I’m Weightless is also on the Disability Arts Online website. 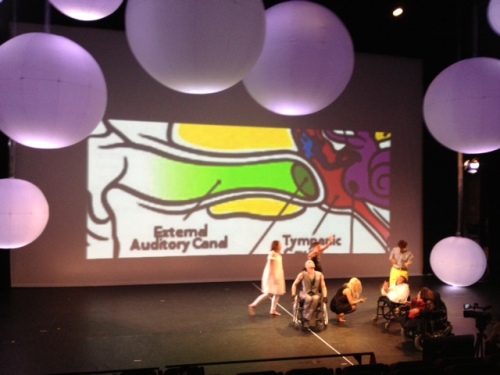 Rehearsal photo of In Water I’m Weightless, by Kaite O’Reilly.

Finally, the fabulous Nina of Sparklewheels.blogspot writes about the panel I was part of ‘Making work for Deaf and hearing Audiences’, plus reviews In Water… on her blog.

‘In Water I’m Weightless’ starts off like a fashion show. Pounding music and bright lights is the backdrop as the five actors enter the stage in elaborate gowns, suits and striking headpieces. The characters take turns in shouting at the audience, shouting that we are all the same, we are all mortal. After this impressive beginning, ‘In Water I’m Weightless’ goes on to explore how the story of the five characters overlaps, and how it overlaps with everyone’s story.

To read more of the above, plugs coverage of Unlimited Festival at Southbank Centre, please go to Nina’s blog: