Mat Fraser recording his part of the audio description CD/download for In Water I’m Weightless.

It is, I think, a most peculiar way to make a living. No two days are the same and my working life at the moment is of such a surreal quality, normally loquacious taxi drivers are silent as I outline the activity….

Still, that’s probably nothing compared to what Jacob probably said when he got home for tea that night (‘Well, I hung off the top of a ladder and had to pour a stream of water from a glass jug onto a specific mark on the bare shoulder of Karina Jones, whilst a group of men watched and filmed it’).

We are in the final week of rehearsals for In Water I’m Weightless with National Theatre Wales – a week filled with media activity as well as intense rehearsals and run-throughs.

It is our designer, Paul Clay, who has brought the slow motion filming and mediatised elements into the production. An accomplished designer and artist, he also live video mixes in the underground club scene of New York, where he lives.

The design and visual world of the play is a response to the poetic conceits at work in the text – the weightlessness from floating in water, and the sense of freedom and liberation this creates (see my earlier blog about filming stunt dives).

This is in direct contrast to the weight of prejudices, fear, and preconceptions usually loaded onto the disabled body. It was our director (and artistic director of NTW), John McGrath, who pulled out this quotation ‘In Water I’m Weightless’ from the large body of monologues I have written over the past few years, and from which the text of this montaged production is taken.

This is my second show with Paul, and John. The first, Perfect, at Contact Theatre in Manchester, also had a strongly visual component and won Paul the M.E.N award for best design of 2004, whilst I won best play. It is wonderful to be back in a rehearsal room with both, aware of the growth in experience, skill, and stature since we last collaborated. 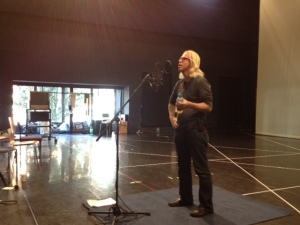 Designer Paul Clay recording a description of his set, costumes, and visual/video artwork on In Water I’m Weightless for visually impaired and blind audience members.

As In Water I’m Weightless is an Unlimited commission, part of the Cultural Olympiad promoting the work of Deaf and disabled artists, we are keen to make the work as accessible as possible – which brings us to the second mediatised experience of the week.

Karina Jones, one of the cast, suggested we prepare a pre-show recording for visually impaired and blind audience members, so they would have a sense of some of the visual and physical aspects of the work. One performance at the Wales Millennium Centre will have live audio description (a headset is provided for audience members, if required, and during the performance a description of action and visual elements is relayed), but we were all excited with Karina’s suggestion. I provided bullet-points for the performers to use as stimulus – a description of their bodies, costumes, and the dance/movement sequences – and Paul spoke about the visuals and his design concept. Mike Beer recorded them, and this should be available prior to the show at Wales Millennium Centre as a CD, and also hopefully as a download from NTW’s website.

The final media experience of the week occurred on Thursday, when cast member Nick Phillips and I were guests on the BBC Radio Wales Arts Show, with Nicola Heywood Thomas. The interview will be available for the next few days as ‘listen again’ on: